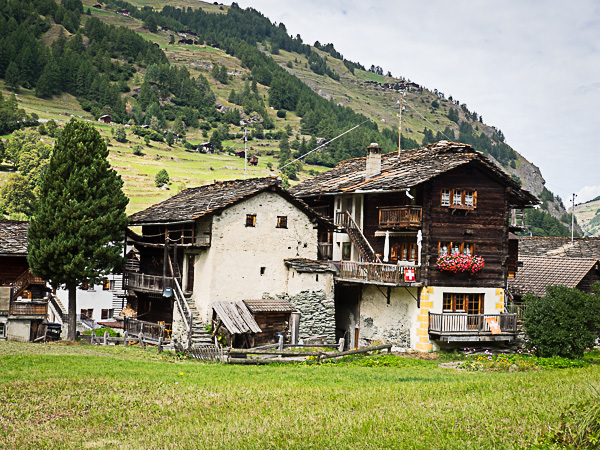 I woke the next morning with the beginnings of a serious cold. My dad had already been suffering the day before so it was not a surprise, but I was glad that we only had a short distance to hike. We took our time with breakfast, admired the electric car parked out in back of the hotel (a rare Mitsubishi i-MIEV) and set off around 9AM. It was a clear sunny day and there was noticeably less snow above the valley than the afternoon before.

To make the most of the day, we decided to make a detour to Lac Bleu, a well-known little lake above the west side of the valley. So after following alongside the road for a short distance, we began to climb again through meadows and small forests. The lake took about an hour to get to and while it was man-made, the view and location were worth the climb. We met people on the trail too – none with the large daypacks that tended to characterize folks doing the Haute Route. The path back down to the bottom of the valley was quite steep, and we were happy when we arrived in the village of La Gouille.

The rest of the day’s route paralleled the road and the river. Despite this, traffic was light and so the long descent toward Les Hauderes was mostly peaceful. We saw the town from quite a distance and it was more than an hour between our first glimpse and when we crossed a bridge and reached the village center. Here we diverged from the main route, which began to climb toward Villaz, instead crossing the Borgne river and following a bike path further north toward Evolene. We walked through forests for a part, then across pastures of freshly cut grass to eventually recross the river and arrive at the edge of Evolene, around 3PM.

Evolene was one of the more picturesque town on the entire route. The main street was narrow and mostly cobbled stones, with shingled wooden buildings on either side. Tourists and locals strolled along in the afternoon sun, passing in and out of shops and cafes. Flags and flowers hung in abundance. We found our hotel, the Hotel Hermitage, just a few blocks from the center of the town. It was a classic wooden building, with matching furniture and decorations, including a poster for movie that had been shot there many years before. Later in the afternoon, we explored the town further, stopping at a pharmacy for cough medicine, a Coop for groceries and pausing at an outdoor cafe for tea, next to a large, rowdy group that seemed to be in some dispute with one of the locals. Neither my dad nor I were feeling well, so after a light snack we went to bed.