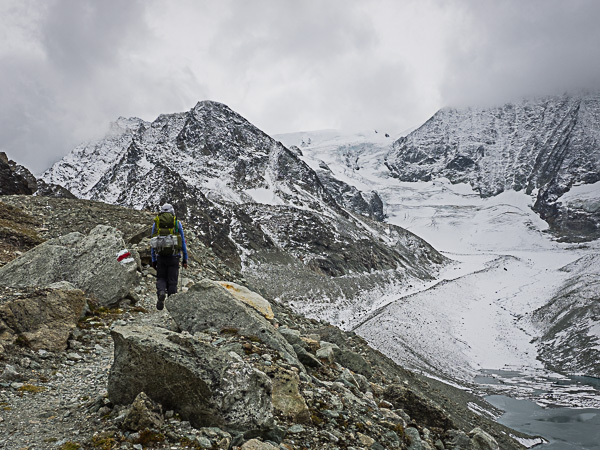 After the long day before, and a relaxed breakfast in the large hall at the front of the hall, we did not get a very early start. Initially we thought we might be able to take a lift to the top of the dam (saving 1,000 feet of climbing) but the lift started later, so we set off on foot around 9AM. Aside from two men out looking for wildlife with binoculars, we met nobody on the trail up to the dam. The day began clear and sunny, but clouds formed steadily through morning and by noon it was almost completely overcast, although sun could still be detected far below toward the Rhone valley.

The route along the Lac des Dix passed through several tunnels – some lit, others not, keeping nearly flat for the entire length of the lake. It was a pleasant, easy walk, save for the fact that the lake was quite long and it took the better part of two hours for us to reach the far end. Above us there was still plenty of snow left from the previous storm. After a short break, we began the steep climb up toward the day’s pass, the Col de Riedmatten/Pas du Chat.

Most of the trail to the pass was good. From the lower pastures we crossed the river to reach the bottom of a large glacial cirque and then clambered along a wide moraine toward the pass. But a quarter of a mile from the pass, the trail split. One fork marked for the Pas du Chat disappeared into a morass of refrigerator-sized boulders. The other made a series of increasingly steep switchbacks across loose sand and scree in the general direction of the Col de Riedmatten. The two passes were separated by at most a quarter of a mile. Ultimately the uncertainty of the route of the Pas du Chat pushed us to go the other way, although it did not help that the one hiker we met coming down reported that it would only get steeper higher up. We slowly climbed, making heavy use of our poles and relying on a fixed chain to pull ourselves up the last few yards to the narrow gash in the ridge that was the pass.

Between the steep and loose trail coming up and the increasingly threatening sky, we took only a short pause on the Col de Riedmatten before starting down the other side. Happily the trail was much more reasonable going down – still steep but at least not requiring anything more than poles to safely descend. Switchbacks carried us down the wall of scree to the bottom of a small valley where we rejoined the trail from the other pass. Below another moraine we again arrived at pasturelands and an hour beyond the pass reached a couple of partially collapsed sheds. The weather had begun to improve too, and we caught a bit of sun as we switchbacked down towards the tiny town of Arolla. Behind the Arolla glacier wrapped the Mont Collon like a giant icy mantle.

Our hotel, Hotel Aiguille de la Tza, was actually another half mile down the valley past Arolla, so we paused for photos of the town’s main square and flowers, and then continued down. They were out of regular rooms so we wound up in a fancy room on the top floor. Dinner was in the dining room downstairs, and for a vegetarian entree they improvised an interesting combination of egg and vegetables. We ate well.