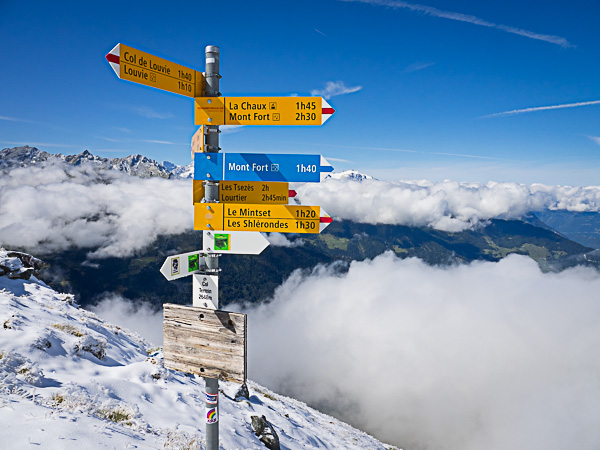 Under normal circumstances, this would have been one of the longest and most difficult segments of the journey. Climbing over three separate passes and traversing a poorly-marked maze of moraine below the disintegrating Grand Desert glacier is challenge enough, but we also awoke to thick fog and while it was no longer snowing, there was a good couple of inches on the ground accumulated from the night before. Happily, by the time we had finished packing and eaten our breakfast, the clouds had lifted, providing both breathtaking vistas of the Grand Combin massif across the valley, and a view of the path we were to take.

The first pass on our itinerary was the Col Termin. To reach it, one traverses steep hillsides and rockfalls along a narrow path. The snow made this a bit challenging too, for while there was no ice, it could still be slippery. Following in the footsteps of others helped though, as did the steadily improving scenery, as views opened up below, across and above us. The combination of fresh snow, green pastures below and sharp peaks above was truly stunning.

From the Col Termin things became more difficult. Firstly, the snow had begun to melt and form slush. Secondly, the route now descended, making footing dicier. Thirdly, the altitude was beginning to affect some of us. Progress was slow. Noon arrived and we were still not near the second pass. At one stop, a falling rock the size of a baseball (the result of melting snow) grazed the top of my head and for a moment, I doubted the wisdom of our course. But we continued on. Finally just before 2PM, we reached the second pass, the Col de Louvie.

Initially we had a good trail to descend on. The snow, while a couple of inches in places, was not too slippery. But after a little while we reached a small glacial pond and the route became steadily less clear. In the scree and moraine below the glacier there really wasn’t a trail at all. After a section of class 2 scrambling we were reduced to trying to follow the red and white blazes. When these too disappeared, we wound up making a bee-line for a spot that we’d seen other hikers pass ahead of us. In the end we did recover the trail, but I can easily imagine losing it for good under more limited visibility. Indeed low clouds did periodically drop down. We were pleased to reach the final pass, Col du Prafleuri, around 4:30PM. We took our photos of the barren landscape behind, and then started down.

Reaching Cabane du Prafleuri was a straightforward hour of descending. Scree gave way to pastures and the narrow trail broadened to a wide service road. We were tired enough that we figured if the cabane had space, we would stay there rather than continue to Lac des Dix. But while they did have some space, it quickly became apparent that due to a lice outbreak earlier in the year, things at the cabane were a bit complicated. We would be staying in crowded dormitories with no showers, limited water and all belongings needed to remain outside. We reluctantly decided to continue on. We left just as the first call for dinner went out, and immediately noticed first one, then two, then a whole herd of nearly two dozen ibex clustered below the cabane.

We wanted to avoid hiking in the dark as much as possible, so we continued swiftly down. At one point we apparently missed a turn and ended up on a traverse that had been partially covered by rockfall. At the other end we passed a sign indicating that the trail we had come from was closed due to avalanche danger. When we did turn the corner though we had a wonderful view of Lac des Dix, the massive pyramid of Mont Blanc de Cheillon glistening in the early twilight. Happily the remainder of the route was on a service road and presented no difficulties even as the light continued to fade. We reached the top of the dam, and then took a mixture of road and shortcuts descending thousand feet to the bottom where the hotel, a massive building that had originally housed the crew building the dam, stood. We were very happy to reach the hotel at a little before 9PM, and even happier when they told us that dinner would still be available (we had called from the top of the dam). Needless to say, we ate and then slept quite well.