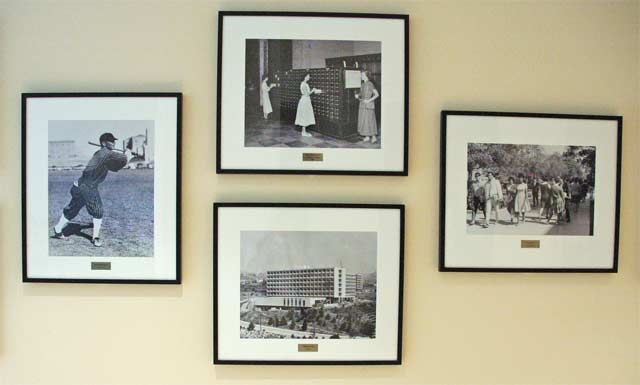 Got up at the usual time, and made a quick stop for breakfast in the dining hall. Then did more last minute studying before walking down to class. It took the usual 12 minutes, and I arrived a bit early, but rather than chat, I preferred to wander around the corridors, and continue studying.

We started the final slightly late. It wasn’t especially difficult, but it was long, and there were clearly sections of the vocabulary that I didn’t know. Not good. I wound up finishing in a hair over 2 hours, and went straight back to the dorm. It felt a bit empty, not having anything immediate that needed doing, now that Arabic is finished for the summer. I had a slow lunch, packed most of my remaining stuff, and fiddled around with the computer.

I managed to (finally) connect with my cousin who lives just a few miles away, so we agreed to meet for dinner in the evening. Then I figured I might as well explore Westwood, so I walked down to Wilshire and along Westwood Blvd. There are still a fair number number of Iranian restaurants and shops along the way, although they are by no means the majority. It was fun though. Once I crossed Santa Monica Blvd, the character changed again, but I continued for a while longer.

After a little miscommunication, my cousin and I met up, and she drove back their place. Her son is quite a bit bigger than when I last saw him, and he is very active, and already speaking an interesting mixture of English and Farsi (and, I am told, on occasion Spanish).

We all wound up going to the Santa Monica 3rd Ave. Promenade, where I was the previous weekend. We had a fun little walk, with my young relative taking a great deal of joy in the dinosaur fountains that lined the walkway. We wound up eating dinner at California Pizza Kitchen (my first visit there in several months), though the experience was a bit mixed: the service was uneven, and every few minutes, somebody managed to drop a dish with shattering results.

After eating, we were all rather sleepy, so they dropped me off by my dorm. and we said our goodbyes. Good that we managed to get together though, it would have been silly to spend an entire summer a few meals apart and never meet.

Tomorrow, I move out.