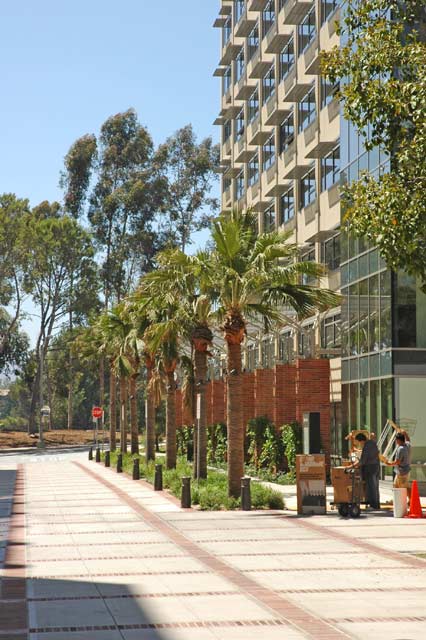 So I was up early. I had a quick breakfast, and decided I’d go down to Border’s in Westwood to pick up a certain DVD. This is of course a decent walk, and it took probably about 25 minutes to get there. What do I find? I’m too early, they won’t open for another hour plus. So I figure I’ll walk around a bit, kill some time, and come back. I’ve just made it to the Masonic lodge off of Santa Monica Blvd. when my roommate calls to inform me that the housing staff just came by and want my stuff moved out immediately, or there’ll be penalties (fees). Argh!

Well, I wound up going all the way back, and moving my stuff out. To the downstairs lobby, where I entrusted it to these same folks. Having officially checked out, I went back down to Westwood again, and this time the Borders was actually open. Found the movie. Bought the movie. Returned. It was now getting warm, and I’d just walked down to Westwood and back twice. I paused for a bit in the UCLA library, mainly doing webpage related stuff, and then taking a few pictures around the area. My last campus pictures for quite a while, I’d guess.

When my uncle gave my a call that he’d be by, I returned to the dorm, for the final time. He was there in short order, and we loaded up quickly. However, the plan was also to drop off a broken computer at recycling. This proved difficult, because nobody seemed to know where the recycling place was. Once we found it, it was closed.

On the way back to the house, we stopped at an excellent Chinese restaurant off Sunset Blvd, where I had my first experience of dim sum. Interesting. Apparently my uncle’s been visiting the place since the mid-1980s, before some of its current staff were even born!

Next up, we went by an Armenian grocery store. There, after some asking, we managed to obtain a half flat of overripe tomatoes, for something around $3! These are for the birthday party (of my nearly-10-year-old cousin) tomorrow.

We got to the house just as the cake (round, like a tomato) was being colored red. Then there was green frosting for leaves, and tomato-themed party favors being organized in gift bags. Most of us were tired, so once the cake and party-related stuff was done, they called it a night.

In a bid to figure out my schedule tomorrow (or rather, how I’m getting to Hanford), I discovered that there was a much better bus for me that leaves from Glendale, not Union Station in downtown LA, and goes to Bakersfield at the same time that the other one does. Problem: you have to get the ticket at a station, which Glendale is not. And you can’t get it online. Argh.

So my uncle wound up taking me down to Union Station at 11PM on a Saturday night to buy my ticket. It worked. The place was open, I got my ticket, and we returned, shortly thereafter to go to sleep.

Tomorrow, if all goes well, to Mineral King.