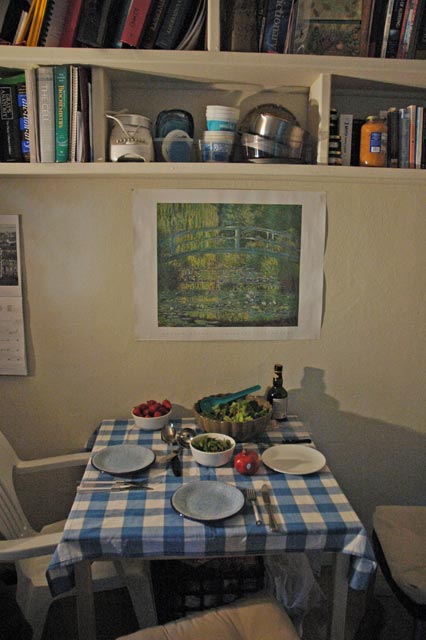 Spent an embarassingly large portion of the day trying to get my computer configured and backed up. Scintillating, I know. However, it has to be done sometime. I must say I’m not finding the switch to Windows all that appealing. For one thing, the quality of shareware seems to be a lot lower. Hard to find a good cheap backup utility. For another, I’m getting sick of rebooting because of this or that software installation. Annoying. Yes.

I managed to differentiate my large collection of clothes (and smaller collection of clean clothes) into two categories: to stay and to go. Problem is, to go is rather bulky. Had a hard time figuring out which bags or suitcases would fit. Eventually, settled on the largest ones we have that are genuinely rollable. Hopefully this’ll lesson the transportation difficulties.

Two friends from Stanford are renting a place in Palo Alto for the summer, and I was invited over for dinner. Tried to thing of something appropriate to bring along, and so wound up with a flat of strawberries from a stand down highway 1. They’re supposedly from Watsonville, so I guess that makes them pretty local.

Palo Alto was a bit more complicated to navigate than I last remembered, but after getting the address straightened out, it worked out okay. My friends are renting the guest cottage of a rather well-appointed house. The cottage is an amazingly cozy place, both in terms of feel, and in-terms of space constraints. While dinner was cooking, the stove apparently managed to blow two separate fuses, which made things a bit more complicated. Nonetheless, dinner was impressive (oh dear, I’ll have to be cooking soon, won’t I?) and it was fun to catch up in such a relaxed setting. Ended up spending a good bit longer than I’d really expected. Heigh-ho.