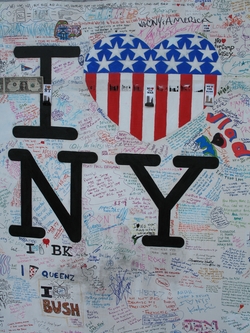 As usual, the first day after a trip doesn’t start very early. I was actually up at a normal hour, and spent the time productively employed in unpacking the more immediately useful stuff.

We resolved to go downtown so that I could figure out my housing situation, and they could see a bit of New York. Fair enough. The drive down was, amazingly, traffic free. Parked at the usual lot on Broadway (it has a discount for students and staff affiliated with the university).

Our first stop was the on-campus housing office. Apparently my grandmother has become well-known down there, having visited several times to try and get information for me. I was assured by a friendly staff that my chances were pretty good for getting into housing off the waitlist.

At the off-campus housing office, the main information obtain was that housing in Manhattan is tight, and my only real chance would be through a broker. Fair enough.

We picked up lunch near campus, but I was more than a little disappointed with my panini. Definitely not up to Parisian standards (well, the lunches I remember having there anyway). Next it was off to the ID card office. A long slow line almost had me missing my next appointment, but the guy in front was quite entertaining (all the tips he offered to another guy in line had film school sounding like quite a racket – all kinds of ways to make money on the side). For the ID cards, they were using my old camera for the photos. Interesting.

My next appointment, with the director of our MA program, went well, even though rushed back 8 blocks in a big hurry. Turns out they were running a bit late too, so I needn’t have worried. We had a pleasant discussion, and I received a couple of useful tips.

Afterwards, I tried out my new ID card in the library, picked up a needed book, and purchased a book locker there for the year. Hopefully it’ll see a lot of use! I met my grandmother in front of the statue of Giuseppe Garibaldi in the park, and we waited for the other 2 members of party while watching pigeons and strollers make their way past.

Driving back was a breeze, and despite a stop at the grocery store where an attempt was made to buy everything in sight, we were back home around 7PM. After dinner, we each went off to our various pursuits: mine was trying to figure out what useful information I still needed to get from the broker.