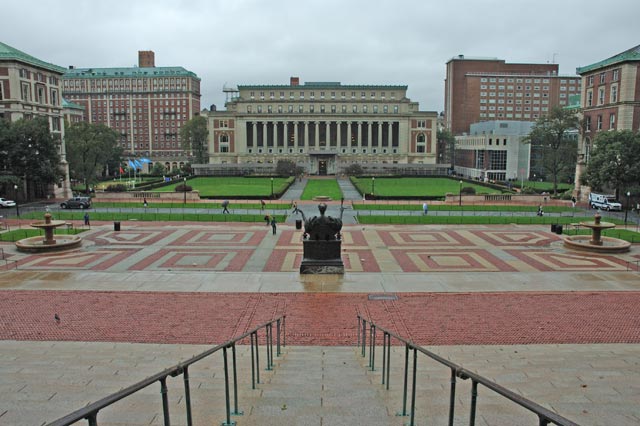 When it rains, you tend not to hurry too much. We took our time getting up in the morning, and had a very relaxed breakfast. Finally, around 11:30AM, we decided to go down to the city, and look around.

To go down, we choose to go along the Hudson. At the town of Hastings, we saw a sign for a farmer’s market. In spite of the wind and rain, the farmers were there, and we picked up some excellent apple juice (from fuji apples, no less) in the process.

We also made a brief stop in Yonkers to look around. The rainswept Hudson was an interesting sight.

Crossing over to Manhattan, we stopped not far from General Grant’s tomb. Our original plan, to go inside the nearby church, was thwarted by an in-progress wedding. Instead, we made our way past Union Theological Seminary, Barnard College, and onto Columbia. I found Columbia’s campus rather appealing. It was distinguished, and not all that small, and yet compact and lacking in all the sprawl so characteristic of Stanford. Doubtless I would have found it small if I’d spent longer on it.

As the rain had died down, we could take some pictures, and visit the bookstore. From there, we returned to the car, pausing to read a bit about the history of U.S. Grant on the way.

Driving down further, we miraculously found a parking spot on 5th Ave, near 75th St. This was right by Central Park, which would have been great, had it not been for the once-again substantial rain. With umbrellas and coats, we made our way along. The park was nearly empty, and so in search of lunch, we left it after about an hour, grabbing sandwiches at a nearby deli that was also purportedly a bakery (although it had almost no bread).

On the way back to the car we passed the Guggenheim and the Met. The rain was so heavy, that we paused under an overhang by the Met to eat our sandwiches and wait for the storm to pass. Not that it did really, of course.

The drive back was spent anticipating getting dry once we stopped. The rest of the evening at the house was pretty quiet. At least one member of our party is now convinced that in New York, it rains much of the time.