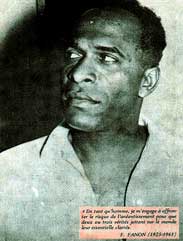 The morning was spent finishing the paper on Ottoman Greece. Not really satisfied, but I’m definitely out of time. As for the seminar, we each gave 5 minute presentations on our region of the Ottoman empire. I was actually a bit disappointed, as most people seemed unable to give a very good historical summary, let alone a broader analysis of the incorporation of their particular region in the empire. Summarizing is difficult, true, but the least we can do is be linear, and (on the other hand) not repeat every single battle, right?

For the evening, I was going through various works by Frantz Fanon, including an excerpt from “A Dying Colonialism” on the political implications of veiling in the Algerian Revolution, that I read last spring in Paris. The chapters on “National Culture” and “National Consciousness’ from “The Wretched of the Earth” were new though.

In “National Consciousness”, Fanon offers a very compelling analysis of postcolonial states. Essentially, the native elites use nationalism to stir up the masses and force the colonizer out. This achieved, they immediately take the place of the old colonial rulers. The new ‘nation’ remains essentially colonial, run by a corrupt native elite that basically uses national unity and nationalization as a means to line their pockets with the monies that were formerly taken by the colonizing power.

He says much more of course, but this scenario has played out many times, most of them after Fanon’s death in 1962.

The problem is that analyzing the problem and solving it are two different things. The supreme irony is that the Algerian Revolution that Fanon was so dedicated to, and had so much faith and praise for, played out largely along the lines he had described (and claimed the Algerians were not following): nationalism becomes a cover for dictatorship, corruption, and the rule of an intellectually barren native elite.