For the morning, I finished my readings for my other seminar, dealing with the question of how Islamic jurisprudence (law) developed. The particular question surrounds the use of the ‘hadith’, the narrative of the doings of the prophet, Muahmmad. The problem is that none of these were written down until several centuries after the event in question took place. As these narratives serve as the basis for Islamic law, there is naturally interest in establishing their authenticity. 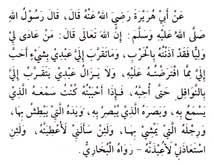 The traditional way to establish authenticity of a hadith is to examine the line of transmission (isnad), prior to its being written down. Since each hadith begins with something like “recorded by A who received it from B who received it from C who was with the prophet on this occasion,” the obvious method of checking is to establish the bona fides of those alleged to have transmitted the hadith. Was B a trustworthy person? Did he live at the right time? Is he known to have met A and C? Etc.

Obviously, this has some limits. What one scholar we read, Joseph Schacht, claims, is that most hadith were essentially created by jurists later on, to support their beliefs, and then the isnad for each was gradually extended backward, in order to establish credibility. He makes some more elaborate arguments, along with evidence he claims supports him, but this is really the gist.

I’m not quite sure I buy it. There are an enormous number of hadith. There are moreover a certain number which scholars agree, by the above method, are manifestly fabricated. But to assume that they are all fabricated, is to in effect assume a gigantic conspiracy of jurists. Schacht is in effect claiming that large numbers of scholars who lived in a vast area, with widely differing beliefs, all engaged in a massive fraud. Which is quite an extraordinary claim.

Oddly enough, class discussion was mainly focused on the present theory and practice of Islamic law. Relevant, no doubt, but not exactly touching deeply on the readings.

In the other course, we discussed Fanon of course. A fun discussion, but one that got occasionally airy, courtesy of a lack of general knowledge of Algeria itself. Context, as we are always told, is everything.