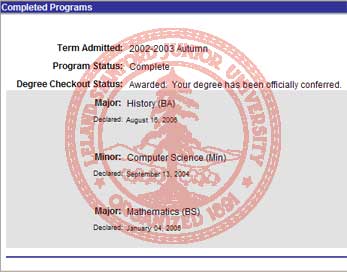 Began the morning with the usual, too-early French class. Apparently I’m not the only one who gets caught up by things being so early. The instructor forgot the homeworks in her office…

The rest of the morning was pretty hazy. Tried to finish off a number of things, including administrativia stipends, my still missing housing deposit check, my now defunct web server account, and my previous cell phone. At $10 a month, I might have just kept the darn thing for my dad, but the battery’s dying, they won’t help us replace it, and they’re adding a $5/month fee to ‘encourage’ us to upgrade. Which is what I did for the summer. My bills went from $10-25/month to $40/month. Thanks, but no thanks.

Lunch was with my grandmother, who came down for her weekly physics colloquium, at an Afghan restaurant called Khyber Pass. Good food, but a lot of it seemed decidedly Persian.

Discovered, in the process of trying to straighten up my domain name, that all of the address/e-mail info in the registration is public in the whois database. Urgh. No wonder my gmail account has been getting spammed. Back to using yahoo as the address when I buy stuff on the web.

For dinner, I wound up trying to cook a different type of spaghetti, with less than ideal results. The by now sprouting potatos worked out a bit better. Combined with steaming the broccoli, I spent almost 2 hours in the kitchen today. Hopefully no more cooking needed for a while.

Oh, and I’ve officially graduated from my old school. Owing to some paper complications, I went to the ceremony back in June of course, but I didn’t actually officially graduate then. A kind of silly situations, given that I’m already in grad. school, but that’s how end-of-summer degree conferral goes, apparently.