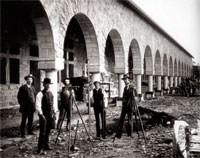 I had this rather silly idea that it would be fun to see the first day of winter quarter classes at Stanford, now that I’ve definitely graduated (and left for greener pastures?). I shoehorned in lunch with a friend on California St. where we had a chance to discuss the state of entrepreneurship in the valley over kebabs and baklava. The Turkish Delight that I add to the desert probably shortened my life-expectancy a fair bit, but at least I have a good feeling of why Edmund was willing to betray his brother and sisters to the White Witch (in Narnialand).

To my amazement, I actually did manage to find a parking on campus that wasn’t ridiculously far from the class I hoped to pop in on. I don’t know why, but I got a kick out of sitting through the first lecture of U.S. History since 1945. It wasn’t that the material was new, but the professor’s manner of lecturing was oddly appealing. He combined digressions so seemlessly into the narrative, that it was hard to see where the actual substance let off, and the random bits began. It contained, in particular, a very articulate description of the means and purpose of higher education. In short, the sort of lecture I wish I’d had at the beginning of freshman year there, as opposed to the standard banalities traded about by administrators and fellow classmates.

My other attempts to find professors I’d had was less successful. One of my advisers left for MIT over the summer. The other one was back (briefly) from Egypt, but I didn’t manage to find him either. Just as in high school, my circle of acquaintances and teachers is disappearing rapidly. Instead, I rather aimlessly toured the campus, took some pictures of notable things (Memorial Church, Hoover Tower, the Rodin sculptures playing ultimate frisbee) before joining S- and T- (yet again) for some tea at a Peet’s that I didn’t know existed.

For the evening, I began the less-than-wise project of redesigning the website. Motivated by laziness, and the hope that a slicker setup will motivate better (and more) content, I spent some very quality time with WordPress, Gallery and my server. Apache redirects are being uncooperative right now though.