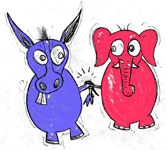 Politics and breakfast don’t mix. At least this is my running theory. A very pleasant breakfast with a teacher I’d had in high school somehow morphed into an extended political slugfest. This was doubly peculiar in light of the fact that said teacher is somewhat short on time. It is interesting how one can agree completely with someone on local issues, have great respect for them, and find their general politics… hard to stomach. And as my conservative friends will hopefully agree, I’m generally not too bad at finding some form of common ground (which explains, I think, why I was invited some time ago to write an article for the Stanford Review, the campus’s conservative paper).

So when I got home, I was in a political frame of mind, and in lieu of lunch, did more than the usual complement of moping about the state of the world. If, after all, people I deem reasonable, have views at such great variance to mine, it does leave me a bit concerned as to the validity of my own philosophy. And to be frank, I’m still not sure what that is. I vacillate. My pedigree is clearly of the left. My heroes are peasants, factory workers and revolutionaries, not industrialists, militarists or reactionaries. I believe people deserve a fair shake, and that given circumstances, a fair shake means the guarantee of a certain minimum existence.

And yet… And yet if the last 6 years have shown anything, it is the threat posed by consolidated power. A welfare state demands an intrusive state, yet how far is it from a welfare state to a nanny state (see Britain) or national security state (hi America). I am distinctly uncomfortable with the idea of people in far off places determining the lives of thousands or millions. If you’re the one facing the executioner, does it matter if it was Stalin or Hitler that put you there? The American claim has always been to have found a middle path: liberal democracy as a way to ensure both freedom and stability. Yet this is certainly not a stable equilibrium.

So I pondered. And pondered some more. And went back to working against Apache redirects. Yay. Gallery is now successfully embedded in WordPress. Time to start uploading photo albums.