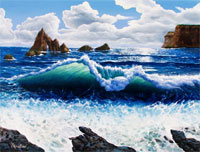 I had a novel thought this morning: why not go out and photograph all those nice beaches I’ve been planning on seeing for the last few weeks. Time’s running low after all (going back to New York on Saturday).

I started with Cowell state beach. It’s just a bit south of Half Moon Bay, and I figured it would have a good view north of the coast (including the hideous Ritz Carlton hotel). The last time I was there was senior year of high school. On the way there, you actually get a good look at the fields of asparagus and broccoli and whatnot that dot the Coastside. At the beach itself, I had fun scrambling up onto a rock that jutted out into the water, and trying to shoot photos of the waves breaking the rock (while not getting wet). Next I worked my way south, along Verde road, where I paused for a wider view of the coast from the inside (including a large egret).

My next stop, meant to capture the miles upon miles of vertical cliffs south of HMB, was at the top of the last hill before San Gregorio (coincidentally, not so far from where Y-‘s car expired during our last year of high school, leaving me some excellent B&W pictures of Y-, U-, Y-‘s car, and a calla lilly). As usual, the road doesn’t quite give an unobstructed view, so I went up a hillside, and trespassed through a fence to finally achieve a vantage point where I could see all the way to Pillar Point. If one is not averse to a little off-trail walking, it is well worth the visit. On my return, I found the same calla lilly plant, plus a few unidentifiable bones.

Returning, I rather spontaneously made a detour to Martin’s Beach. This rather funky community of perhaps 50 houses may have at one point been a fishing village, but at this point, it was a rather unique blend of bohemian refugee and yuppie getaway. The road ends right on the beach, and so after paying the parking fee (I was impressed anybody was around to collect it), I went the length of the beach in both directions. The only other folks about were some surfers, who launched themselves around the rather neat rock formation that dominates the bay (kinda like a big shark’s tooth). Also had a short walk through the town itself. Perhaps if this academia gig doesn’t work out, I can aspire to being the next parking attendant there?

Spent the afternoon on a mixture of website design (fiddling with WordPress’s K2 theme), packing and organizing the day’s photos. Owing to the fact that I’ll be in New York for my birthday, we had a little pre-birthday celebration in the evening too with pie, candles (thankfully not the relighting kind) and presents. I am now officially almost 23.