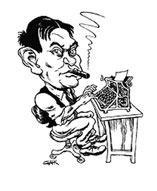 I am in a Menckenesque mood today. I had the inestimable good fortune of attending a seminar today in which instead of spending the second half of the session in a discussion, our student presenter gave us a 45 minute lecture which was not merely repetitive, unorganized, and often lacking in substance (as we have all, theoretically, read the works in question, an exhaustive summary seems rather superfluous), but full to the gills of unsupported opinions. Whew, glad to get that out of my system.

What’s interesting is that the two Islamic reform movements we examined were, in their day of rather limited importance and reach. Muhammad Abduh’s “Islamic Modernism” (as we call it, he himself would undoubtedly have used different terms) does not appear to have ever spread beyond a certain, smallish intellectual elite. Ideologically, it may be interesting, but historically, it seems pretty minor. Muhammad ‘Abd al-Wahhab’s theology meanwhile remained confined to a minor region of central Arabia until well into the 20th century.

Meanwhile, during this period, we have a rash of new Islamic sects and movements, from Sufi orders in North Africa, like the Sanusiyya, to the Babis and later the Bahais in Iran, to the Mahdists in the Sudan (who, it may be remembered, disposed of Chinese Gordon in Khartoum in 1885). Smaller local movements abounded as well. All of these are in fact Islamic responses to modernity, and they seem to make for a much more textured approach than simply a juxtaposition of Wahhabism and Islamic Modernism.