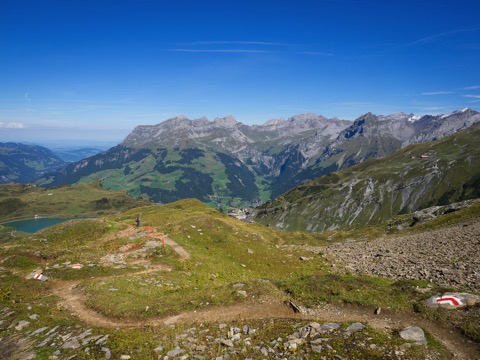 We awoke and went downstairs to enjoy one of the nicer breakfasts of the trip.  The food was the typical Swiss continental breakfast (unremarkable, though good), but the hotel’s dining room was a large, high-ceilinged hall with vast windows letting in the morning’s sun.  Breakfast extended an extra fifteen minutes at least due to photos.  Outside, the town was bustling – Saturday apparently having brought everybody out into the streets.  We did a quick search and purchased a pair of hiking poles at an eye-wateringly high price, then returned to the hotel to finish our packing.  It was nearly noon when we finally set out.

As with the previous day, we decided to shorten the day’s hike by taking advantage of local transportation.  In this case, a popular ski gondola from the town could take one to the lake more than halfway to the pass (or all the way to the pass, though this seemed less exciting).  The hardest part was finding the gondola station, at the other side of the town.  The line was packed with people of all ages and nationalities.

After a short, steep ride, we were disgorged at the edge of a large level area containing the Truebsee.  The road traversed around a pleasant lake, passing a small marina/restaurant where one could rent pedal boats.  Then we were making long slow switchbacks up the hillside, sweating heavily in the hot afternoon.  The trail to the Jochpass was a popular one, despite the gondola option (fortunately, the trail largely bypassed the gondola poles/wires).

Jochpass (2207m) was not especially impressive in its own right, but we did get some nice views back at Engelberg and more significantly forward toward Titlis and the valley leading down to Engstlenalp and eventually Meiringen.  We took a small snack break just beyond the pass, and watched as groups of mountain bikes started on their way down a separate bike path to Engelberg.

From the pass, we descended toward the Engstlensee, reaching the shore of the lake around its midpoint.  There was a nice breeze to cool things off, and an hour from the pass, we were in front of the large classic-looking Hotel Engstlenalp.  Had we had more time, it looked like a good place to spend a night.  From Engstlenalp though, we had a choice of three routes – a valley route (shorter, paralleling the paved road), a high route traversing another pass and dropping down steeply into Meiringen, and a middle route that traversed between and was recommended by our guide book as offering good views and not being too challenging.  We had our small lunch of bread and cheese a few feet past the junction of these routes, and after examining the map and double-checking the time, we took the middle route.

We started around 3:30PM and it was soon clear that while the route looked flat on the map, the traverse in fact did a fair bit of up and down.  The valley walls were quite steep and we found ourselves going in and out of thin pine forests with frequent views across of mountains and waterfalls.  We saw nobody along the trail.  After an hour, we reached the hamlet of Baumgarten which seemed to have no people, but plenty of chickens.  The terrain switched over to rolling pastures after that and we encountered several groups of sheep and cows along the way.  Around 5:30PM with part of the valley starting to fall into shadow, we took a break at the edge of another wood.  We were surprised to meet two hunters in full camouflage outfits hiking the other way – the first people we’d seen since Engstlenalp.

Once in the wood, the path widened into a jeep track and eventually merged with a paved road.  We passed a couple of vacation homes as the route began to curve into the main valley, and we even had a few cars pass us by.  The sun was getting seriously low when we finally emerged in the town of Reutli.  We had hoped to take a bus the rest of the way down, but when we did encounter a passing bus, we understood the driver to be telling us that there was no such bus.  So at 7:15PM, feet more than a little sore, we resumed our descent along a combination of narrow roads and paths. No sooner had we left the town than we heard the sound of a gondola, and discovered, that there had in fact been an easier way down.  But not wanting to wait an hour for the next one, we continued.  It was a cool, quiet, dark walk.  The hiking poles we’d purchased in the morning proved invaluable.

When we arrived in Meiringen, it was fully dark and it took a little while to get our bearings and find our way to the hostel that I’d reserved space in for the night.  When we actually got there though, the place seemed less than welcoming, and that coupled with generally being tired and wanting a good night’s rest (often difficult in shared accommodations) prompted us to cancel and go back out.  So at 8:15PM, there I was on my phone, looking up hotels and making calls.  Being a Saturday night, I didn’t have much luck, so when I finally reached a place that was nearby and had space, I took it even before I’d asked the price (which turned out to be fine).

We trudged over to the Hotel Tourist, which was across the river and so in Reichingen not Meiringen and checked in.  Happily, the hotel had a restaurant, and even though the kitchen had closed for the evening, the friendly owner/chef prepared us two large vegetable salads.  So we had our dinner without needing to venture out again.  The beds were soft, but we slept without difficulty.