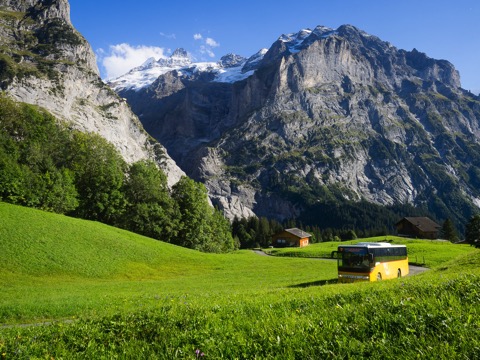 The weather didn’t look very hopeful when we got up in the morning – overcast with occasional drizzle.  So we enjoyed our breakfast slowly, chatted with the friendly inkeeper, and when it was time to leave, tried to protect the contents of the backpacks with plastic bags and to protect ourselves with rain jackets.  The route was short enough that we planned to hike the whole thing, assuming the rain didn’t become a serious nuisance.  It was our earliest start of the trip to date – 9:45AM.

The initial climb of the morning was a steep one through a thin forest.  The rain tapered off quickly too, so we were soon quite warm.  After half an hour, the steady roar we’d heard most of the way up become more pronounced and we emerged to the sight of Reichenbach Fall, site of the famous (and final battle) between Sherlock Holmes and Professor Moriarty.  Shortly past the falls was a substantial plaque comemorating that event, placed by the local Holmes appreciation society.

The steep section ended at Zwirgi where the trail criscrossed the main road next to a small hotel.  The woods became thicker and we encountered a couple of groups of people, mainly going down, clad in bright rainjackets.  We also saw a number of colorful mushrooms.  Eventually, the trail began to parallel the river, occasionally exchanging sides with the road.  We passed several small villages, eventually reaching Rosenlaui around noon, where a beautiful old hotel sat at the end of a switchback in the road.  Further along at Schwarzwaldalp we found a mountain hostel full of visitors and soggy hikers, and a river mill.

Beyond Schwarzwaldalp, the trail became steeper and again more open.   The woods were gone entirely, replaced with pastureland and occasional shrubs, allowing open views ahead and behind.  Particularly on the south side of the valley, there were vistas of the steep mountains capped in snow, punctuated by streams and waterfalls. The clouds too had begun to clear and when we emerged at Grosse Scheidegg (1962m) at 2:30PM, there were patches of blue to be seen.  We had lunch on a bench facing down the valley toward Grindelwald.  Several times during lunch, we watched the distinctive yellow Post bus making laborious hairpins as it followed the switchbacking road up one valley and down the next.

By the time we had started our descent, the sun was shining and it was a pleasant, warm afternoon.  The trail down was surprisingly steep, and we had occasional troubles distinguishing it from the other paths as we crossed cow pastures or paralleled the road.  There were numerous herds of cows browsing the grass, and in one enclosure three cheerful pigs napped or snorted.  At the Hotel Wetterhorn, where we had stayed nearly 15 years before, the trail finally left the main road and we dropped into the trees, following the course of a creek for some distance, before eventually emerging among the vacation homes that form the outskirts of Grindelwald.  It was around 6PM when we stepped across the main street in the town.

Grindelwald aspires with some success to be an international tourist destination.  So it was that our place for the night, the Hotel Tschuggen, had a room for us that included an en-suite bathroom and a bathtub – the first of the trip.  We asked them for recommendations for dinner, looking in particular for a salad bar, and so ended up in the crowded, surprisingly hip Memory Cafe, where we made full use of the salad bar and had a dish of rosti (the national dish) with meat and cheese.  After dinner, we wandered the streets, and I was surprised to see tourists from places one doesn’t see much of in the US – Russians, Arabs from the Gulf States etc.

Back at the room, we at long last learned the fate of my dad’s luggage.  It had been misdirected during the transfer at Newark and only appeared there after several days.  We had no obvious place to leave it, and at this point we’d managed to make due in terms of clothes and gear, so we suggested they forward it to our last hop on the trek – Vevey.  The bathtub proved useful not just for relaxing, but also for laundry.