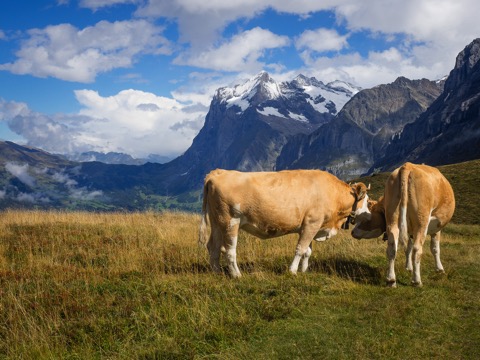 During the night, it rained again.  We woke up to a view of the remnants of the storm – wisps of cloud were blowing up the valley, and fresh snow was visible on the major peaks on both sides.  We had breakfast in the hotel’s small dining room, then packed up and made our way out into the town.  We asked around for a shop that might carry battery chargers, and found ourselves directed to an optician/eyeglass shop near the town center.  Much to our surprise, when we asked the shop owner, he rummaged behind his counter for a moment and then reappeared with a small box containing a universal camera battery charger.  Although the price was about triple any other charger I’ve gotten, it more than proved its worth through the remainder of the trip, charging cameras (and cellphones) for the duration.

The day’s route to the shoulder of the Eiger first had us dropping down to the bottom of the valley where we met for the first of several times the green and yellow train that went up to the pass and eventually to Jungfraujoch.  The climb began steeply along narrow streets and paths past small houses that gave way first to pastures and then to small forests.  It warmed up quickly too – when we arrived at the restaurant at Brandegg a bit before noon, the cold of the morning had more than disappeared.  Half an hour later, we were in front of the mountain hotel at Alpiglen with new clouds descending toward us.

As we ascended, the views back on Grindelwald became steadily more expansive.  The Eiger, when clouds didn’t block its view, felt remarkably close.  We met a few people on the trail, but it appears most preferred to take the train, though the numbers of folks going down grew as we approached the pass.  At one instance, it really did seem to be about to rain, but after a minute or two of precipitation, the cloud moved on, and when we finally clambered across the tracks to the train station at Kleine Scheidegge (2061m), we were fully in the sun once more.  We found a reasonably dry bench to have our lunch on, a few hundred yards above the station.

Kleine Scheidegge, owing to its position on the Jungfraujoch rail line, was something of a zoo. Every few minutes a new train, traveling either up from the valley, or down from the mountain, would pause, open its doors, and hundreds of tourists would pour out.  Several of the trains appeared to be entirely occupied by one tour group or another.  Given the views, it wasn’t hard to understand the popularity of the stop, but I was doubly glad that we had walked up.

After lunch, we decided to hike up a bit further on the Eiger trail, following the ridge to a gorgeous little lake (albeit a manmade one).  Beside the lake we were surprised to find a small station that served as an intermediate stop on the train, decorated on the inside with a vast collection of vintage cameras (mostly attached to the ceiling).  We then continued up the much steeper mountainside toward the Eigergletscher Restaurant.  We had extensive views of the ravine containing the lower section of the glacier as we climbed up, but the clouds were dropping again on us, and when we reached the restaurant, we could barely see the rock face of the Eiger, a few hundred yards off.  We sprinted over for a look, and some photos, and as soon as we had turned to retrace our steps, the rain started in earnest.

From the Eigergletscher station, we quickly decided that a hike down to Kleine Scheidegge, let alone the town of Lauterbrunnen 3 hours further along, was not going to be very enjoyable in the rain and wind.  Instead we hopped on the first train through the station, purchasing tickets all the way down to Lauterbrunnen, and then up to Murren on the other side of the valley.  At Kleine Scheidegge, we swapped trains, and spent most of the ride down trying to keep warm and stay dry.  It was certainly cozy in the train, compared to the soggy fields and villages outside, though the fog and clouds occasionally parted far enough to allow us to see across to the other side.

In Lauterbrunnen, we had half an hour until the next departure, so we picked up some groceries in a nearby store on the main street, and attempted to keep out of the wind.  Rather than a train, the next leg took us on a large gondola which in about 5 minutes covered the 500 vertical meters to Grutschalp.  From Grustschalp there was a train, and a short ride later we were clambering out in Murren, a small town halfway up the mountainside directly across the valley from the block of rock and ice known as the Monch.

We spent the night at the Eiger Guesthouse.  Our room was originally intended as a quad, so we had more than the usual amount of space, and the view out the back was sufficient to convince us that it was still raining, so we opted for dinner in the hotel’s own restaurant.  Others must have had the same idea as the cozy wood-paneled dining room was quite packed.  Dinner was the time-tested combination of salad and pizza, after which we happily called it a night.