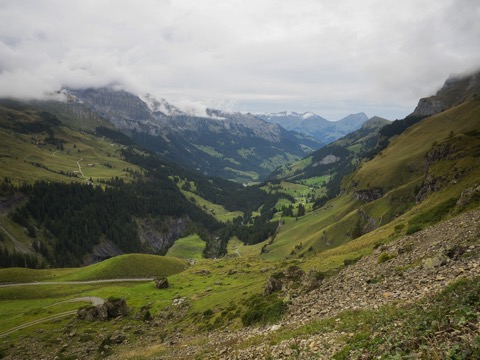 The weather had not notably improved the following morning, but it was at least yet not raining.  We enjoyed a leisurely breakfast in the dining room before packing up.  It was just after 10AM when we set out along the town’s main thoroughfare.  Initially, we had plenty of company, but at the far end of the town, most people turned to the lift station for the Schilthorn.  The lift goes to the top of the peak, where the panoramic revolving restaurant Piz Gloria, featured in the 1969 James Bond film, is to be found.

Our route meanwhile climbed leisurely across pastures and through small woods, traversing parallel to the main valley.  An hour later, we passed by Spielbodenalp and its rustic restaurant.  The temperature was cool, but so long as we kept moving, it was not uncomfortable.  The fog on our side of the valley blanked the higher elevations, but on the far side, it would lift and drop, occasionally providing surprising vistas.  At Boganggenalp, we paused at the Rotstockhutte for some hot tea.  The fireplace made it particularly cozy.

At half past noon, we resumed the climb.  The trail had turned straight up the main valley at this point and we passed a herd of cows, a pond and a small stream before the grass fnally gave way to rock and scree.  After a steep and rocky final kilometer of switchbacks, we reached the Sefinefurgge pass (2612m), just after 2PM.  The wind made stopping uncomfortable so we took a few photographs, caught our breath, and then hurried on.

Descending, the west side of the pass was even steeper.  The initial hundred yards were wooden steps (the rail was handy).  Despite the fog, we had glimpses of the valley stretching away below.  After the first half hour we were back in pastureland, but the route remained steep switchbacks.  Aside from a few sheep, we saw nobody. Around 1h30 below the pass, we reached a small farmhouse and the trail broadened into a jeep track.  Next we met some goats, and a jeep, but still no people.  An hour further along, we passed another farmhouse, with two playful dogs, one large, one small, sitting in front.  The trail finally dropped into a forest below the farm house, just as it was beginning to drizzle again.  It was 5:15PM when we reached the hamlet of Steinenberg and saw people for the first time since the pass.  From there onward, the road and trail were one and the same, though car traffic was almost nonexistent.

Our hotel for the night was at a place called Pochtenalp, slightly off the main route.  The trail was well-marked, though for a little while it was unclear why we had descended only to climb back up near the end.  The Hotel Waldrand stood at the end of a long driveway, and in the middle of the driveway was a wooden post with boot on it, and a geranium growing out of it.  It looked promising.

Inside, the building was constructed from floor to ceiling with beautiful light-colored wood.  Panelling and furniture were of much the same material.  The room had no television, or sink, but instead an actual wash basin and a clear glass pitcher full of water.  The place had obviously been lovingly refurbished, but it was still very much the sort of hotel where before automobile travel became popular, one might have come up with the whole family for a two-week holiday, to relax in the mountains.

Being the end of the season, we had the dining room to ourselves, which was too bad considering that the dinner was truly excellent – easily the best meal of the entire trek.  Salad was followed by a good soup, kept warm on an alcohol burner.  The main course of filet mignon and potatoes was superbly prepared.  We finished off with a delicious chocolate mousse.  The innkeeper and his wife the cook were having their dinner in a nearby booth, and one of their sons was having a grand time scooting around on his toy car.  We had a nice chat too with the server, who was a visiting worker for the season from Slovakia.  It was a good meal.

After dinner, we made a desultory attempt to send a few e-mails on our progress but were stymied by the lack of cell signal and less than reliable WiFi.  So instead we read for a little while and went to bed.