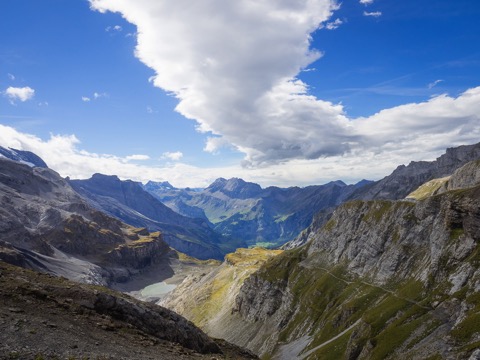 The combination of cool mountain air and a good comforter meant we slept quite well.  Breakfast was notable in that both the bread and the cheese were locally produced (the bread from the kitchen, the cheese from the village below).  Despite a few early rays of sun, it was mostly overcast when we set out just after 9AM.

Our route first continued down to Griesalp, where we rejoined the main trail.  The town itself amounted to half a dozen houses, two hotels and a restaurant.  The trail began with a moderate climb up into the forest, and we encountered several piles of freshly cut firewood before we re-emerged in the pasture.  Drizzle began not long after, although the bigger nuisance was the occasional gust of wind coming down from the pass ahead.  We passed Unter Bundalp and Oberer Bundalp in succession.  On a steep section shortly after 11AM, we met a British couple on the way down, who told us that they had turned back at the pass due to the high winds.

For the next two hours, the trail headed steadily south up the long valley to the pass.  The wind remained unpleasant, and a few gusts almost bowled me over, but there were enough sheltered sections to keep things from being unbearable.  For once, we had a hard time keeping warm as we ascended the final steep chute to the pass.

The Hohturli pass (2778m) – the highest pass on the Swiss via Alpina – was a narrow gap in steep ridge separating two long valleys.  It was nearly impossible to keep upright there, but fortunately a few large rocks provided partial shelter.  A few hundred yards above the pass was the Blumlisalphutte, and so we resolved to go there for shelter, a hot beverage and information on conditions on the other side of the pass.  This was easier said than done for even using poles, hands and occasionally each other for support, it took nearly fifteen minutes to cover the 200m or so to the hut.

The Blumlisalphutte itself was quite large, and nearly empty.  The views were excellent (the wind had cleared much of the high clouds), as was the tea.  We met another group of hikers whom we’d encountered the day before on the Sefinefurgge Pass, who were spending the night at the hut, having decided to wait out the wind.  Still, they told us the other side, once one was off the pass, would be much better.

Getting back down to the pass required buttoning down every clip and zipper and plodding laboriously down, mostly sideways (to keep our faces out of the wind).  Even so, my dad’s glasses were blown off halfway down for they had no clip.  We paused to search, but they were simply gone.  He managed to get his sunglasses on, only to have them nearly blown off too, and eventually he resorted to descending without glasses at all.  For the remainder of the trek, he had to rely on the sunglasses.  Once at the pass, we took a few more hurried photos, and continued on.

As soon as we were off the pass, the wind slackened appreciably, and while we continued to dodge occasional gusts, it remained manageable the rest of the way down. The first part was wooden steps, which were replaced first with scree and then grassy meadows, and only a few minutes later the sun peeped out from behind the high clouds to warm us.  We found a partially-sheltered nook around 3PM with great views across the valley of the Ufem Stock and the Bluemlisgletscher, and had our lunch there.

As we continued descending, the valley broadened into a wide meadow, and we crossed and recrossed the stream several times before reaching a pair of cowsheds above Ober Bergli.  Past that point, there was again a steep drop, and at the bottom, the Oeschinensee shining a glacial greenish-blue.  The trail had widened to an almost-road and switchbacked steeply down, passing a singularly well-appointed restaurant halfway to the lake.  The trail traversed around the lake, at height of 100-150 feet above, partially cut into the steep hillside, and affording frequent glimpses of the lake, waterfalls and peaks on the far side.  It was just before 5PM when we reached the far side of the lake, now in shadow, with a few boats anchored close by.  Several hundred feet beyond was the Hotel Oeschinensee, and the end of the paved road.

The final hour of descent into Kandersteg was mostly along gravel roads as the trail worked its way downward trying to keep on the opposite side of the river as the main road.  We saw a few people on their way down too, presumably after a nice afternoon stroll or lift-ride to the lake.  We considered taking the lift down from the lake ourselves, but managed to miss the last one of the day by half an hour.  Shortly before the town, the trail turned into a paved path alongside the river, and we saw not a few families out for their evening walk.

Like other towns we’d stayed in, Kandersteg was laid out along one primary road.  Our hotel was on the far end, opposite the downtown.  When we reached the Hotel Alpina, we found the front desk empty, and once again the cellphone saved us, for the proprietor it turned out was in the back and hadn’t heard or seen us.  He did however have a vacuum packing machine, which he used to seal the Alpkase that we’d been carrying since the first day of the walk.  The room included a balcony with a view, and once we had admired this and spread out our various things, we walked back to the town center in search of dinner.

The restaurant we wound up at, in the Hotel Zur Post, had been recommended as having a salad bar, and we each had large salads for dinner.  After dinner, we chatted with the friendly restaurant owner about the weather, and he commented on the high winds, which we learned had caused the lift to the lake to be shutdown for part of the day.  He also told us that the forecast for the next day was mostly rain, not wind, though the forecasts were not especially reliable for the region.  We returned to the hotel with some doubts about the next day’s plans.