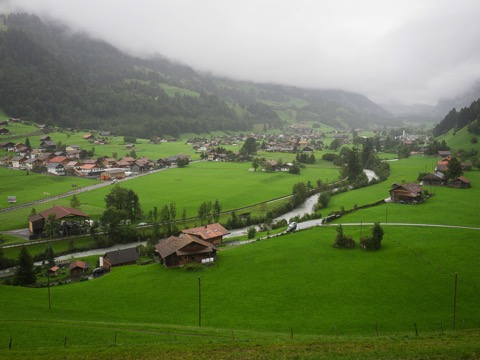 It was already raining when we got up the next morning and made our way downstairs to breakfast.  A brief walk to the tourism office in town confirmed that it would be a wet day, and so we changed our plan from following the via Alpina over the pass, to walking along the floor of the valley, in the hopes of avoiding the worst of the weather.  We set out around 10AM, a departure somewhat delayed because one of the hiking poles had gone missing (never to be recovered).

The valley trail began in the city center, near the train station, and more or less followed the course of the river, on the west side of the valley, whereas both the railroad and the main road stuck to the east side.  Initially, there was a rapid descent through some pine forests and isolated farmhouses, but the valley broadened out quickly, and we were soon passing small houses, gardens, and pastures.  The rain had slackened considerably byt then, but we saw few other folks on the trail.  We took almost no breaks and made good time.

Around 1PM, we reached Telleburg, an ancient castle in partial ruin atop a small hill.  The location was quite scenic, with views of the valley and the towns below, and we explored the remnants of several of the towers, but the rain took the opportunity to begin anew, so instead of taking lunch in the castle, we hurried on toward the town of Frutigen in the hopes of finding shelter.  We arrived, quite cold and wet (despite rain jackets) at about 1:30PM.

The first order of business was to warm up and dry out, and we found a small fast-food restaurant on the main street where I ordered what was nominally Hungarian ghoulash but tasted surprisingly like canned soup.  Still, it was warm.  A little while later, we popped into the local department store and picked up two umbrellas (better late than never).  We also checked in an optic shop to see what it would take to replace the lost eyeglasses, but the time required was too long to be helpful.  We also did a detour down to the train station, a modern building, far from the center of town, only to learn that the bus to Adelboden could be picked up from the town center.  The rain had convinced us that this was a good day to take advantage of alternate transportation options.

The bus ride to Adelboden was scenic and equally important – warm.  The bus was pretty full – a combination of tourists, locals, and schoolchildren – but somehow everybody fit.  The ride was around half an hour, but by the time we stepped out of the bus, the rain had stopped and the clouds were lifting.  We had some beautiful views across the valley.  Our first choice for lodging was well below the town center just off of the main road, but when we hiked down and saw it, we decided it would be worth spending a bit more for a place in the town itself.

We wound up staying at the decidedly upscale Hotel Bristol Relais du Silence.  I’m not sure what the receptionist thought of the two damp, somewhat bedraggled hikers who wandered in around 5PM, but she kept those thoughts to herself, and we got a nice upper-story room with a view.  After warming up and mostly drying out (we did some laundry in the sink too), we took a walk about the town, replacing the missing hiking pole with an inexpensive low-tech one and a replacement raincoat for the flimsy poncho that was torn to shreds on the pass the day before.   We also picked up an extra memory card.  Adelboden struck me on the whole as being a more tasteful version of Grindelwald – nice, but not so overtly catering to jet-setting tourists (and certainly not like Zermatt).

For dinner, we had more than the usual amount of time to decide, and we ended up going from one end of the town to the other looking at the options, eventually choosing the one we’d started at.  The Hotel Adler had easily the largest restaurant that we’d eaten in the entire trip, and it was fairly full.  Ordering on the assumption that salads in a traditional restaurant would be largely an afterthought, we were surprised to find the salad easily as large as the main course (pasta and a great grilled salmon).  Dessert was good too, and full stomachs made sleeping easy.