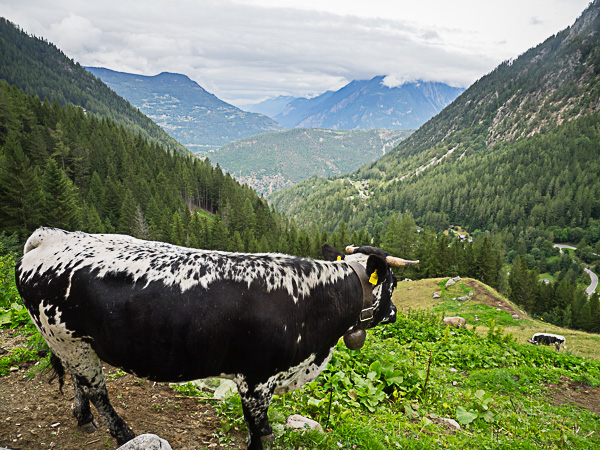 The morning arrived cold and gray but without any obvious signs of rain. My jet lag too was gone and I slept well, so by the time breakfast was over and we were packed up, it was almost 9AM. Our first goal was the Forclaz Pass, 1,200 feet above, where our friends who had just flown in the day before had spent the night. The trail climbed steeply through the forest and we were surprised at a large number of runners going the opposite direction. At length we learned that the trail was on the route of the 150+ mile Swiss Peaks ultra-marathon that had started a number of days earlier. Our friends were waiting when we reached the top of the pass, where the highway makes a steep turn before descending to Martigny and the Rhone river valley.

There is a high route from the Col de Forclaz to Champex via the Fenetre d’Arpette that in good weather affords amazing views of the Trient glacier. The downside is that this route is steep and difficult in sections. Given the mixed weather, we opted for a lower route that traversed pastures and hillsides. Evidently we were not the only ones to make this choice for we met a continuous stream of hikers and runners, coming mostly in the opposite direction. We also met a number of cows and even a couple of groups on horseback. Occasionally the fog would clear enough to provide views of the Rhone Valley below. Around noon we reached the high point of the lower route, and a bit later arrived at a mountain restaurant at Alp Bovine. Not wishing to stop quite so early in the day, we pressed on, descending rapidly to cross a small river and re-ascend to reach a cafe in the hamlet of Plan d’En Haut.

The cafe had a good view of the valley and the drizzle had stopped, so we had a drink and a late lunch there. A large, fancy-looking tour group was occupying a tent nearby with many seats, so we had plenty of time to eat our sandwiches and wait for our tea. Continuing onward, the trail began to ascend again, entering a forest full of mushrooms and other colorful fungi. An hour later we passed a small skilift line and crossed a marsh to arrive in the small lakeside resort of Champex-Lac. Our hotel, the Hotel Belvedere was beyond the far end of the lake, perched at the edge of the Val d’Entremont, so we passed through the whole town on the way there. Even with the high clouds, we had amazing views of the valley with its toylike towns, roads and trains.

After getting situated and enjoying the balcony views at the hotel, we went back out to see more of the town. As we were admiring the lake, we were impressed to see a solo swimmer climb out, seemingly unphased by the cold weather and even colder water. At the opposite end of the town, above an area of fancy second-homes, we found the town’s botanical gardens. By the time we had completed our exploration, it was time for dinner and after a period of indecision we settled on the restaurant of the Hotel du Glacier, whose menu included a number of pizzas choices among other things. Pizza proved the popular choice and by the end of the meal we were all full and ready to go to sleep.