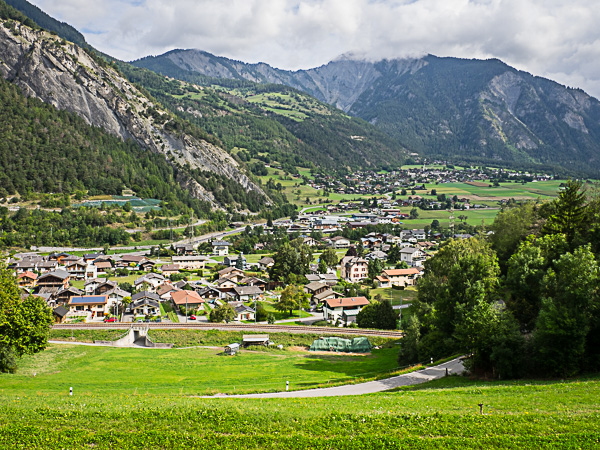 We enjoyed an excellent breakfast and a great view of the valley from the picturesque dining room of the hotel. We had a pleasant conversation with the proprietor who had come many years ago from the German part of Switzerland and had run the hotel (and its restaurant) ever since. Then the day’s work began – a lengthy segment which reversed the usual trajectory by descending first to the bottom of the valley, and then climbing up the other side at the end of the day. The weather was cool and overcast, but there was no drizzle and it steadily cleared through the morning and into the early afternoon.

From Champex, we followed a combination of paths and dirt roads (farmer’s treks) northward along the west side of the valley, slowly working our way down toward Sembrancher. We passed several farming villages, and in Soulalex, one of the larger ones, paused to admire a large garden alongside the main street. Soon, the gardener, an older lady, emerged from one of the houses to say hello and ask if we wanted a few tomatos from it. We did not refuse. Further along, we followed a detour to the chapel of Saint-Jean, directly overlooking Sembrancher. The final descent was quite steep. When we emerged on a small road, we ran into a group of three Americans who recognized us from the trail the day before. We exchanged information and experiences as we arrived in the town.

Sembrancher was a sizable town at the very bottom of the valley, spread on both sides of the Dranse River. We followed winding streets, past both renovated farmhouses and modern homes. Soon we were again walking through pastures, following the river upstream. As the valley narrowed, the path went alongside the river for a bit, passing a green retaining pond at one point and then climbing up a small hill to reach the outskirts of Le Chable. The sun was shining brightly when we stopped by the cemetery behind the church to have our lunch. We had fresh tomatoes in our sandwiches and mooncakes that our companions had brought from San Francisco for dessert.

The distance from Le Chable to Verbier was not far, but once we crossed the river, we were ascending steeply pretty much the whole way. The road thanks to many switchbacks, limited its grade somewhat, but the trail had no such restrictions, and we had a hot, hard slog from the bottom of the valley, up the nearly 2,500 feet to Verbier. While the road was quite noisy (motorcycles mostly) the trail diverted and a good portion of it was along small access routes for the various farms and pastures above Le Chable. There were streams too, and a small waterfall, as the vistas slowly opened up behind us. By the time we reached the edge of Verbier, a rather large and spread out resort on the south-facing hillside above the Val de Bagnes, the clouds had returned.

In Verbier, we’d opted to stay in an ‘authentic’ apartment rented via Hotels.com. It turned out to be a well-furnished chalet, well away from the center of town, with a view of much of the valley. Rather than eat at a restaurant, we made a quick trip down to the Coop grocery store (things close early in small towns, especially on weekends) to get vegetables and pasta. We returned to the apartment just in time for the rain began anew. Dinner was a joint effort – a large salad, pasta and homemade suice, and a store-bought fruit tart considerably superior to what we were used to back home.